DANIEL LIPPMAN joins us. He is a reporter for POLITICO and a co-author of POLITICO’s Playbook, the most indispensable morning newsletter for the biggest influencers in politics.

Before joining POLITICO, he was a fellow covering environmental news for E&E Publishing and a reporter for The Wall Street Journal in New York. 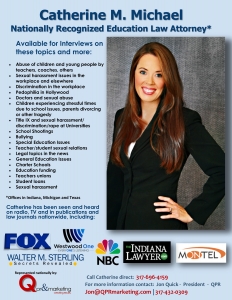 CATHERINE M. MICHAEL is the head of the Hollingsworth & Zivitz Education Law Division. She is licensed and practices throughout the state of Indiana, Texas, and Michigan and nationwide through local counsel. She represents students and their families in a variety of education and personal injury matters including Special Education Due Process, Section 504 matters, Expulsion, Disciplinary issues, personal injury of children including injury, sexual abuse, molestation, and rape cases both in and out of school environments, private school issues and discipline as well as other civil rights and disability claims experienced by students.  She possesses extensive knowledge regarding special education due process, teacher and student discipline and dismissal matters, Americans with Disabilities Act (ADA), personal injury of children in schools, and other civil rights matters. 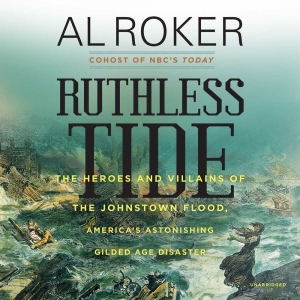 Central Pennsylvania, May 31, 1889: After a deluge of rain—nearly a foot in less than twenty-four hours—swelled the Little Conemaugh River, panicked engineers watched helplessly as swiftly rising waters threatened to breach the South Fork dam, built to create a private lake for a fishing and hunting club that counted among its members Andrew Mellon, Henry Clay Frick, and Andrew Carnegie. Though the engineers telegraphed neighboring towns on this last morning in May warning of the impending danger, residents—factory workers and their families—remained in their homes, having grown used to false alarms. At 3:10 P.M., the dam gave way, releasing 20 million tons of water. Gathering speed as it flowed southwest, the deluge wiped out nearly everything in its path and picked up debris—trees, houses, animals—before reaching Johnstown, a vibrant steel town fourteen miles downstream. Traveling 40 miles an hour, with swells as high as 60 feet, the deadly floodwaters razed the mill town—home to 20,000 people—in minutes. The Great Flood, as it would come to be called, remains the deadliest in US history, killing more than 2,200 people and causing $17 million in damage. In Ruthless Tide, Al Roker follows an unforgettable cast of characters whose fates converged because of that tragic day, including John Parke, the engineer whose heroic efforts failed to save the dam; the robber barons whose fancy sport fishing resort was responsible for modifications that weakened the dam; and Clara Barton, the founder of the American Red Cross, who spent five months in Johnstown leading one of the first organized disaster relief efforts in the United States. Weaving together their stories and those of many ordinary citizens whose lives were forever altered by the event, Ruthless Tideis testament to the power of the human spirit in times of tragedy and also a timely warning about the dangers of greed, inequality, neglected infrastructure, and the ferocious, uncontrollable power of nature.

AL ROKER is known to more than thirty million TV viewers and has won thirteen Emmy Awards, ten for his work on NBC’s Today. He also hosts Wake Up with Al, a weekday morning program on the Weather Channel. A New York Times bestselling author, Roker lives in Manhattan with his wife, ABC News and 20/20 correspondent Deborah Roberts, and has two daughters and a son. 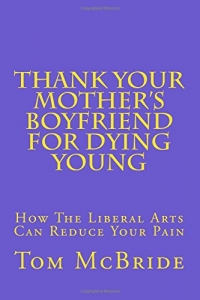 THANK YOUR MOTHER’S BOYFRIEND FOR DYING YOUNG: HOW THE LIBERAL ARTS CAN REDUCE YOUR PAIN by Tom McBride (Author)

Dr. Samuel Johnson famously said, “Life is a condition in which there is much to be endured and little to be enjoyed.” We all know that life includes grief, betrayal, disappointment, and defeat. It is painful. But is there any way to escape needless pain? There is—and this book of wisdom contains ten rules for lowering life’s suffering. Tom McBride has derived this advice from a blend of his personal experience and his lifetime of liberal arts study. Among the other benefits of the liberal arts and sciences is good counsel for living a more analgesic life. In this little book are suggestions, derived from the likes of Darwin and Wittgenstein, for diminishing the agony of grief and resisting unwelcome social pressure. Here you will learn how to sidestep the deceptions of language and to find the serenity of accepting the role of luck. Here are ten rules for lowering the misery index in your life. They range from “Thank your mother’s boyfriend for dying young” to “Never take driver’s ed. from Aristotle” and well beyond. Here is a lively, witty liberal arts guide for reducing the unnecessary pain of the human endeavor.

TOM MCBRIDE is co-author with Ron Nief of The Mindset Lists of American History (Wiley, 2011) and The Mindset List of the Obscure (Sourcebooks, 2014). He has authored as well four mystery novels (Godawful Dreams, Rox & Darlene, The Homicide At Malahide and The Curious Old Men of Belial College). Godawful Dreams was featured on public radio’s Chapter A Day during summer of 2016. He is also author of The Great American Lay: An All Too Brief History of Sex, and When You Could Only Dribble Once: 51 Famously Forgotten Game-Changers, which features among others Beloit College’s great coach Bill Knapton. His most recent works of mystery fiction are Bent Dead in Beloit, The Jaded Lady of Janesville, Wisconsin, That Bad Old Baylor Corpse and Bill Shakespeare, Sports Writer.