STANDING FOR REASON: THE UNIVERSITY IN A DOGMATIC AGE, by John Sexton (Author), Gordon Brown (Foreword) 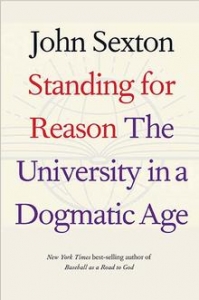 John Sexton argues that over six decades, a “secular dogmatism,” impenetrable by dialogue or reason, has come to dominate political discourse in America. Political positions, elevated to the status of doctrinal truths, now simply are “revealed.” Our leaders and our citizens suffer from an allergy to nuance and complexity, and the enterprise of thought is in danger. Sexton sees our universities, the engines of knowledge and stewards of thought, as the antidote, and he describes the policies university leaders must embrace if their institutions are to serve this role. Acknowledging the reality of our increasingly interconnected world—and drawing on his experience as president of New York University when it opened campuses in Abu Dhabi and Shanghai—Sexton advocates for “global network universities” as a core aspect of a new educational landscape and as the crucial foundation-blocks of an interlocking world  characterized by “secular ecumenism.”

JOHN SEXTON is president emeritus, dean emeritus, and Benjamin Butler Professor of Law at New York University. His previous books include the New York Times best seller Baseball as a Road to God and Redefining the Supreme Court’s Role.