NOSE OVER TOES by: Janet Sutherland-Madden 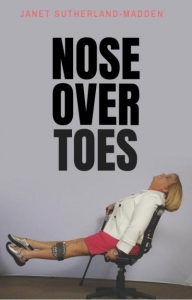 This book is about former Chicago radio reporter, Janet Sutherland who had been taking four aspirin four months straight in 2004, while working at a Columbus, Ohio radio station as an advertising sales rep. Sutherland left work early to walk her dog Bogie after a grueling day knocking door to door selling radio ads and was struck with the worst headache of her life. Sutherland suffered a ruptured brain aneurysm. One in 50 people currently have a brain aneurysm and do not know it. Sutherland miraculously recovered and felt her story would save lives and provide hope to survivors. NOSE OVER TOES tells the story her recovery and includes research from The Brain Aneurysm Foundation. That day, March 22, 2004, friends and family sat at Janet’s bedside, she was given 3 percent chance to live. For weeks her co-workers raised money for her family, joined her battle, and prayed she would survive. After spending years in rehabilitation, Sutherland wrote two bills to promote the disease around the Midwest, she now speaks regularly on Chicago radio stations and on TV about her brain aneurysm experience.

In 2004, JANET suffered from a ruptured brain aneurysm that left her blind and paralyzed. She has now fully recovered and has turned her health trauma into a career by lobbying and fundraising for the Brain Aneurysm Foundation. Sutherland is a former Chicago radio reporter where she was heard covering Supreme Court cases, Illinois legislation, health news and prison stories on WMAQ, WLS, WGN, KMOX, UPI Radio and 75-plus radio stations on the Illinois and Wisconsin Radio Networks. As a result of covering breaking news stories; the deadly Plainfield/Lemont Tornado, Joliet Correctional prison escape, her newsroom was the recipient of AP awards. While a journalist, Sutherland’s news stories were distributed on ABC News, AP and UPI wire services and aired on at least 75 radio stations in the Midwest. She has also written and produced cable television public affairs programs, was a feature freelance writer for The Daily Herald, a sports stringer for The Chicago Sun Times, worked with the Illinois News Broadcaster’s Association in speaking engagements at local colleges, and served on the Junior Board of the Museum of Broadcast Communications. Sutherland-Madden has worked in marketing in cable television and has syndicated national radio shows and news networks including CNN, CBS and Fox.