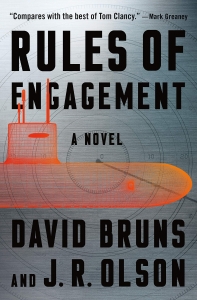 “In Rules of Engagement, David Bruns and J. R. Olson deliver a captivating and utterly authentic portrayal of modern day combat that compares with the best of the timeless classics by Tom Clancy, Dale Brown, and Stephen Coonts. This one must not be missed!” ―Mark Greaney, #1 New York Times bestselling author of Mission Critical. A terrorist breach of the computer systems of the three most powerful navies is about to set them on a collision course for World War III.
Rafiq Roshed is one of the most wanted men in the world. A terrorist with a virulent grudge against the West, he’s disappeared into North Korea where he quietly launches cyber sneak attacks in service of Kim Jong-un. But now he’s about to unleash his virtual masterpiece―a computer virus that, once inserted into the command systems of a military, not only takes over, but also learns the art of war. First penetrating the Chinese, he has their war machine launch a series of attacks on the U.S. Pacific forces. Don Riley, head of U.S. Cyber Command, discovers that not only have the Chinese lost control of their military, but the same virus has infected the American network. It’s only a matter of time before the U.S. loses control of its own military. His secret weapon in this war is a trio of supremely talented midshipmen from the U.S. Naval Academy, who uncover the infiltration, and are working to track down the elusive terrorist. But time is running out. China and Japan have lost control of their military and the U.S. is in danger of doing the same. The weapons are hot and the result is an ever-larger real-world conflict where casualties continue to mount. The only remaining hope is to find and stop the attack at its source―before time runs out.

After graduating from Minneapolis Washburn High School, Jon Olson was inducted into the U.S. Naval Academy in Annapolis, Maryland in July of 1986. Graduating from Annapolis in May of 1990 with a BS in History, Jon was commissioned an ensign in the U.S. Navy and served as a naval intelligence officer before retiring in March of 2011 at the rank of commander. His assignments during his 21-year career included duty aboard aircraft carriers and large deck amphibious ships, participation in numerous operations around the world, to include Iraq, Somalia, Bosnia, East Timor, and Afghanistan, and service in the U.S. Navy in strategic-level clandestine Human Intelligence (HUMINT) collection operations as a CIA-trained case officer. His final assignment before retirement was as the U.S. Naval Attaché at the U.S. Embassy in Helsinki, Finland. Jon also qualified as a Navy parachutist, logging 35 jumps during his career. Since retirement from the navy, Jon has co-authored three novels, Weapons of Mass Deception, Jihadi Apprentice, and the soon-to-be-released Rules of Engagement. Jon and his co-author have also published two accompanying short stories, Death of a Pawnand Battle Djinni. Jon has also co-authored a feature length screenplay about the Falklands War named, “A Close Run Thing”, and a screenplay for a short film titled “The Joining”.Jon earned a Master of Arts in National Security and Strategic Studies from the U.S. Naval War College in Newport, Rhode Island in March of 2004, finishing with highest distinction, and completed his Master of Public Affairs degree from the Humphrey School at the University of Minnesota in August of 2018. Professionally, Jon regularly serves as a visiting lecturer in Carleton College’s Political Science Department, currently holding the F. R. Bigelow Teacher-in-Residence position. He previously taught in the School of Law Enforcement and Criminal Justice at Metropolitan State University and at Minneapolis Community and Technical College. The courses he leads include The U.S. Intelligence Community; Terrorism and Counterterrorism; Intelligence, Policy and Strategy, and Conflict; and Studies in Weapons of Mass Destruction.