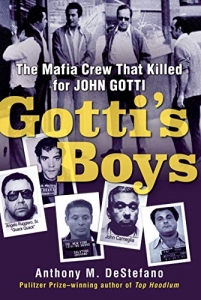 They called him the “Teflon Don.” But in his short reign as the head of the Gambino crime family, John Gotti wracked up a lifetime of charges from gambling, extortion, and tax evasion to racketeering, conspiracy, and five convictions of murder. He didn’t do it alone. Surrounding himself with a rogues gallery of contract killers, fixers, and enforcers, he built one of the richest, most powerful crime empires in modern history. Who were these men? Pulitzer Prize-winning journalist Anthony M. DeStefano takes you inside Gotti’s inner circle to reveal the dark hearts and violent deeds of the most remorseless and cold-blooded characters in organized crime. Men so vicious even the other Mafia families were terrified of them. Meet Gotti’s Boys . .

For the past 20 years he has been a reporter for Newsday in New York City, specializing in criminal justice and legal affairs. As part of the staff of Newsday, Mr. DeStefano has covered a number of major trials, including those of subway gunman Bernhard Goetz (1987), The Happy Land Social Club Fire (1991), reputed Gambino crime boss Peter Gotti (2003), former Bonanno crime boss Joseph Massino (2004) and the so called “Mafia Cops” (2006).  He also covered the case against Wall Street Ponzi schemer Bernard Madoff from 2008 through 2014. As a result of his coverage of the Massino trial, DeStefano has written the book “The Last Godfather: Joseph Massino and The Fall of The Bonanno Crime Family” (Citadel Press).