THE ONLY PLANE IN THE SKY An Oral History of 9/11, by Garrett Graff 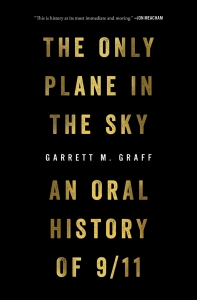 The award-winning journalist and author of Raven Rock shares the first comprehensive oral history of September 11, 2001—a panoramic narrative woven from hundreds of interviews with government officials, first responders, survivors, friends, and family members. Over the last eighteen years, much has been written and said about the terrorist attacks of September 11, 2001, and the profound impact they had on America and the world. But those names, stories, and memories have never before been collected in one place to tell the full, 360-degree story of what happened that day, and in the days after. In The Only Plane in the Sky, award-winning journalist and author Garrett Graff draws on never-before-published transcripts, recently declassified documents, and original interviews and stories from nearly five hundred government officials, first responders, witnesses, survivors, friends, and family members to paint the most comprehensive, minute-by-minute account of the September 11 attacks yet, all told in the words of those who experienced that dramatic and tragic day. From the firefighters who streamed into the smoke-filled stairwells of the Twin Towers to the fighter pilots scrambled from air bases across the Northeast with orders to shoot down any hijacked commercial aircraft; from the teachers who held their fear at bay while evacuating terrified children from schools mere blocks from the World Trade Center to the stricken family members trapped helplessly on the ground, hearing their loved ones’ final words from aboard a hijacked plane or within a burning building, Graff weaves together the unforgettable testimonies of the men and women who found themselves caught at the center of an unprecedented human drama. The result is a unique, profound, and searing exploration of humanity on a day that changed the course of history, and all of our lives. 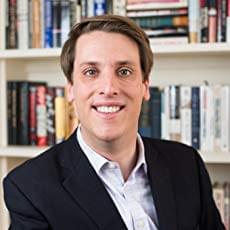 He’s written for publications from Wired to The New York Times, and served as the editor of two of Washington’s most prestigious magazines, Washingtonian and POLITICO Magazine. His books include Raven Rock: The Story of the U.S. Government’s Secret Plan to Save Itself—While the Rest of Us Die, The Threat Matrix: The FBI War in the Age of Global Terror and The First Campaign: Globalization, the Web, and the Race for the White House. Today, he serves as the director of the Aspen Institute’s cybersecurity and technology program.