WHO KILLED CIVIL SOCIETY?: THE RISE OF BIG GOVERNMENT AND DECLINE OF BOURGEOIS NORMS, by Howard A. Husock (Author) 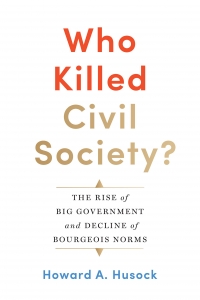 Billions of American tax dollars go into a vast array of programs targeting various social issues: the opioid epidemic, criminal violence, chronic unemployment, and so on. Yet the problems persist and even grow. Howard Husock argues that we have lost sight of a more powerful strategy―a preventive strategy, based on positive social norms. In the past, individuals and institutions of civil society actively promoted what may be called “bourgeois norms,” to nurture healthy habits so that social problems wouldn’t emerge in the first place. It was a formative effort. Today, a massive social service state instead takes a reformative approach to problems that have already become vexing. It offers counseling along with material support, but struggling communities have been more harmed than helped by government’s embrace. And social service agencies have a vested interest in the continuance of problems. Government can provide a financial safety net for citizens, but it cannot effectively create or promote healthy norms. Nor should it try. That formative work is best done by civil society. This book focuses on six key figures in the history of social welfare to illuminate how a norm-promoting culture was built, then lost, and how it can be revived. We read about Charles Loring Brace, founder of the Children’s Aid Society; Jane Addams, founder of Hull House; Mary Richmond, a social work pioneer; Grace Abbott of the federal Children’s Bureau; Wilbur Cohen of the Department of Health, Education and Welfare; and Geoffrey Canada, founder of the Harlem Children’s Zone―a model for bringing real benefit to a poor community through positive social norms. We need more like it. 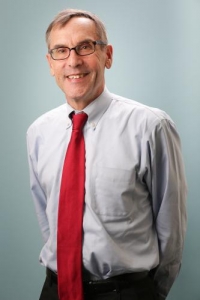 HOWARD HUSOCK is vice president for research and publications at the Manhattan Institute. A City Journal contributing editor, he is the author of Who Killed Civil Society? The Rise of Big Government and Decline of Bourgeois Norms (September 2019), Philanthropy Under Fire (2013) and The Trillion-Dollar Housing Mistake: The Failure of American Housing Policy (2003). From 1987 through 2006, Husock was director of case studies in public policy and management at Harvard University’s Kennedy School of Government, where he was also a fellow at the Hauser Center on Nonprofit Organizations and an adjunct lecturer in public management. ​His writing has appeared in the Wall Street Journal, National Affairs, New York Times, New York Times Magazine, Society, Chronicle of Philanthropy, Journal of Policy Analysis and Management, Philanthropy, The Wilson Quarterly, and Public Interest​. Husock has written widely on U.S. housing policy, including Repairing the Ladder: Toward a New Housing Policy Paradigm (1996). A former broadcast journalist and documentary filmmaker for WGBH Boston, his work there won three Emmy Awards, including a National News and Documentary Emmy (1982). Husock serves on the board of directors of the Corporation for Public Broadcasting. He holds a B.A. from Boston University’s School of Public Communication and was a 1981–82 mid-career fellow at Princeton University’s Woodrow Wilson School of Public and International Affairs.Who KLilled