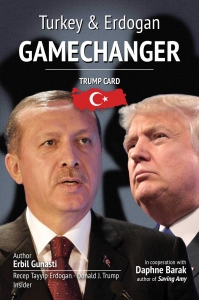 The US, as the sole Christian and Western power, down to the third slot from the top, is being squeezed out by China and India, the number one and two economies in the world, and challenged by two upcoming Muslim countries, Indonesia and Turkey, from the other end.

All the while, Germany, the UK, and France are struggling to hold on to the bottom of the barrel in the top ten list, being of no help to the US during this onslaught.

No, it is not a horror movie. It is about to become reality. And as early as within a decade!

Unless Erdogan and Trump can eliminate soft bellies in the Middle East and Europe, setting the stage for the US to establish balance of power against the rapidly rising East.

ERBIL GUNASTI has worked with 8 prime ministers of Turkey, and then was posted as a press officer at United Nations in New York and now slated to be a part of the Trump Administration as a senior advisor. He is well versed both in Turkish and English, has BA and MA in political science from leading private universities in the US, and supports his arguments with empirical data from historical and philosophical perspectives combined with the economic, social, demographic and military realities in place today, and what he witnessed in person as resident of both countries most of his life in succession.