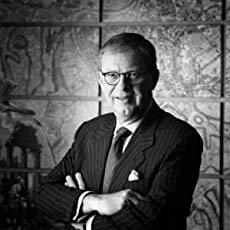 MICHAEL BARONE, Senior Political Analyst for the Washington Examiner a resident fellow at the American Enterprise Institute and the longtime co-author of The Almanac of American Politics joins us to discuss the impeachment inquiry along with his new book:

HOW AMERICA’S POLITICAL PARTIES CHANGE (AND HOW THEY DON’T), by Michael Barone (Author) 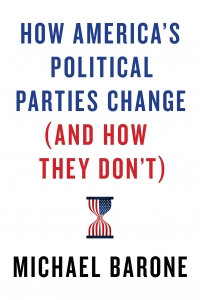 The election of 2016 prompted journalists and political scientists to write obituaries for the Republican Party―or prophecies of a new dominance. But it was all rather familiar. Whenever one of our two great parties has a setback, we’ve heard: “This is the end of the Democratic Party,” or, “The Republican Party is going out of existence.” Yet both survive, and thrive. We have the oldest and third oldest political parties in the world―the Democratic Party founded in 1832 to reelect Andrew Jackson, the Republican Party founded in 1854 to oppose slavery in the territories. They are older than almost every American business, most American colleges, and many American churches. Both have seemed to face extinction in the past, and have rebounded to be competitive again. How have they managed it? Michael Barone, longtime co-author of The Almanac of American Politics, brings a deep understanding of our electoral history to the question and finds a compelling answer. He illuminates how both parties have adapted, swiftly or haltingly, to shifting opinion and emerging issues, to economic change and cultural currents, to demographic flux. At the same time, each has maintained a constant character. The Republican Party appeals to “typical Americans” as understood at a given time, and the Democratic Party represents a coalition of “out-groups.” They are the yin and yang of American political life, together providing vehicles for expressing most citizens’ views in a nation that has always been culturally, religiously, economically, and ethnically diverse. The election that put Donald Trump in the White House may have appeared to signal a dramatic realignment, but in fact it involved less change in political allegiances than many before, and it does not portend doom for either party. How America’s Political Parties Change (and How They Don’t) astutely explains why these two oft-scorned institutions have been so resilient.

MICHAEL BARONE is Senior Political Analyst for the Washington Examiner and a Resident Fellow at the American Enterprise Institute. He grew up in Detroit and Birmingham, Michigan. He graduated from Harvard College (1966) and Yale Law School (1969), and was an editor of the Harvard Crimson and the Yale Law Journal. Mr. Barone has been co-author of The Almanac of American Politics, the first edition of which edition appeared in 1971; the 25th edition is scheduled to be published in June 2017. He is also the author of Our Country: The Shaping of America from Roosevelt to Reagan (Free Press, 1990), The New Americans: How the Melting Pot Can Work Again (Regnery, 2001; paperback edition, July 2006), Hard America, Soft America: Competition vs. Coddling and the Competition for the Nation’s Future (Crown Forum, 2004; paperback edition, 2005), Our First Revolution: The Remarkable British Upheaval That Inspired America’s Founding Fathers (Crown Forum, 2007) and Shaping Our Nation: How Surges of Migration Transformed America and Its Politics (Crown Forum, October 2013). Over the years he has written for many other publications in the United States and several other countries, including the Economist, the Times Literary Supplement and the Daily Telegraph and the Sunday Times of London. His weekly column is syndicated by Creators Syndicate.

GROWING UP IN DISNEYLAND, by Ron DeFore (Author) 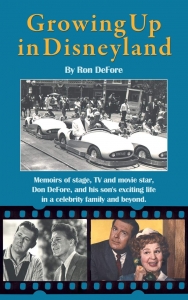 “Growing up in Disneyland” is part biography about Ron’s father, Broadway, movie, and TV star, Don DeFore, and his own autobiography. Don DeFore earned a star on Hollywood Boulevard’s Walk of Fame and was a household name in the 1950s and 60s. He co-starred in numerous feature films with many Hollywood legends, TV shows, and live theater.  He is best known for “The Adventures of Ozzie and Harriet” in which he played the next-door-neighbor, “Thorny,” and his co-starring role as “Mr. B” in the 1960s TV series, “Hazel.” The book includes much of Don’s unpublished autobiography, “Hollywood-DeFore ‘n After.” “Growing up in Disneyland” is a metaphor for Ron’s life growing up in a celebrity family filled with Fantasyland adventures he equates to a Forest Gump type life, from meeting the Beatles, Beach Boys, Led Zeppelin, and other celebrities as Associate Director of the Steve Allen Show. His nearly 20 careers include a mid-life crisis as the Flying DJ at an L.A. discotheque to political positions within the Reagan Presidential Administration to establishing his own company. “Growing up in Disneyland” is also to be taken literally, as Ron spent much of his youth in Disneyland where his father owned “Don DeFore’s Silver Banjo Barbecue” restaurant in Frontierland. Ron and his brother, Dave, have given presentations to various Disneyland interest groups after which many attendees suggested, you should write a book. “Growing up in Disneyland” will be enjoyed by any age group from baby-boomers that remember Don DeFore’s many beloved acting roles to those that don’t but are curious how life was in the good-old-days, especially growing up in a Hollywood celebrity family. Ron has had so many careers and adventures along the way that readers will have much to keep them from putting the book down. 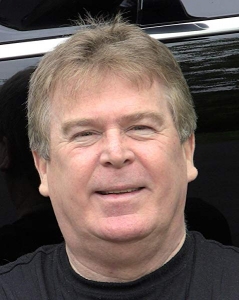 Don DeFore co-starred in more than 35 feature films and is perhaps best known for his TV role as “Thorny” in “The Adventures of Ozzie and Harriet” and his co-starring role as “Mr. B” in the 1960s TV hit series, “Hazel.” His mother was also an entertainer in the late 1930s and early ‘40s as the lead vocalist with the Henry Busse Orchestra as well as Art Kassel and His Kassels in the Air orchestra. She recorded with both and with the later made “I’m a Little Teapot” famous. Ron has a brother, David, and three sisters, Penny, Dawn, and Autumn. His upbringing in Brentwood, just outside of Hollywood—surrounded by celebrities—made for a life full of amazing experiences including having a father who owned a restaurant in Disneyland, “Don DeFore’s Silver Banjo Barbecue” restaurant in Frontierland. Ron’s exciting brushes with history continued all the way to his semi-retirement. Ron DeFore’s life experiences and many careers were wide-ranging: television and film production; music coordinator, senior executive positions in the federal government; and co-owner of a successful public relations firm in Washington, D.C. Ron’s entertainment industry and political credits include Associate Director of the Steve Allen Show, Associate Producer of KTLA-TV’s first public service talk show, “The Gallery,” the Los Angeles TV station’s Public Service Director and Assistant On-Air Promotion Director. In the early 1970s he worked at Paramount Television as a Production Coordinator supporting several shows including “Happy Days,” “Little House on the Prairie,” “Mannix,” “The Odd Couple,” and various movies of the week. He then went to Billy Jack Productions working directly for Tom Laughlin who not only played the role of Billy Jack, but was also its writer, producer, director, and distributor. His mid-life crisis came early in his mid-20s when he decided to stop climbing ladders in the TV and film business and returned to his true love: music. At the height of the disco craze, DeFore became the “Flying DJ” at Dillon’s discotheque in Los Angeles. He spun records at several other clubs including the famous Studio 54 in New York City, wrote a weekly top ten disco column for the Los Angeles Times, and by the late 1970s was hired as “the best DJ in the U.S” to open “Whispers,” Australia’s largest entertainment center at the time. He met his wife, Laurie, while under contract to Sitmar Cruises; she was a passenger, he was the DJ. Ron prides himself in his ability to morph into a variety of careers. After getting married he decided to take life a tad more seriously taking on a federal government position—Manager of the Los Angeles Area office of the Peace Corps. Ron’s family ties to then President Ronald Reagan led to several political positions; the first being promoted to the Peace Corps’ Press Officer and Acting Director of Public Affairs in Washington, D.C. He held two other senior executive political appointments: Director of Public and Consumer Affairs for the National Highway Traffic Safety Administration, and Deputy Assistant Secretary for Public Affairs at the Department of Transportation. After leaving the Reagan Administration, Ron joined a public relations firm as senior vice president specializing in transportation, energy, and environmental issues, and media relations. By 1995 he and two colleagues formed their own firm, Stratacomm, which quickly gained national recognition and had one of the largest automotive PR practices in the U.S. Many of their media accomplishments were rare in the industry including several positive front-page headlines in USA Today and press conferences carried live on CNN-TV. In 2004 they sold part of the firm to a multi-national communications company. Ron has since retired from his firm and continues to consult and write. “Growing up in Disneyland” being his major project since 2018. Ron is married to Laurie Gambino and has a daughter, Brittany, and son, John. Brittany and her husband, Jeff, gave Ron his greatest gift of all in 2009: granddaughter Jayden and as an added bonus to the publication of his book, a grandson due August, 2019.

DR, KNOWLEDGE IS BACK WITH SOME FASCINATING FACTS AS THE WASHINGTON NATIONALS MAKE HISTORY WITH A WORLD SERIES WIN 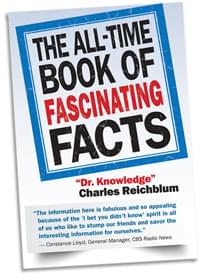 Radio talk show hosts gave CHARLES REICHBLUM the nickname “Dr. Knowledge” — an appropriate name for a man who has amassed one of the world’s largest collections of interesting facts and stories over more than 50 years as a journalist. 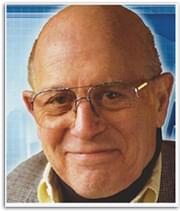 Charles now presents the best of his formidable collection in this book of all-time fascinating facts. The All-Time Book of Fascinating Facts is packed with information that will surprise and challenge — information that entertains, educates, enlightens, and is fun to read. With over 500 interesting stories in easy to access question and answer format, readers can quiz themselves or quiz others, and never be at a loss for an intriguing fact or memorable story. For the past seven years, Charles has been broadcasting the daily “Dr. Knowledge Feature” nationwide on the CBS radio network and for 10 years he also hosted the “Dr. Knowledge Show” on station KDKA in his hometown of Pittsburgh. He has written 11 Knowledge in a Nutshell®and Dr. Knowledge Presents books, and he won the Freedoms Foundation Award for his book Greatest Events in American History.