TAKEN FOR GRANTED: HOW CONSERVATISM CAN WIN BACK THE AMERICANS THAT LIBERALISM FAILED, by Gianno Caldwell  (Author) 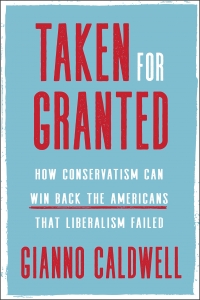 A Fox News political analyst tackles some of our communities’ toughest challenges with timely insight from his own life: the story of how conservative values helped a kid from the South Side of Chicago find a life of opportunity.

“A must-read.”—Brian Kilmeade, bestselling author of Sam Houston and the Alamo Avengers

Born to a mother consumed by drugs and raised by his grandmother in poverty on the South Side of Chicago, Gianno Caldwell saw firsthand how lawmakers from both parties have failed African American voters on issues like poverty, welfare, and education. But as someone who beat the odds growing up under a fear-based mentality that limits what people can achieve, Caldwell believes there’s another way.

In this groundbreaking book, the Fox News analyst describes his personal journey while detailing a hopeful vision for a nation no longer beholden to identity politics and self-limitations. Trapped within the expectations and traditions of our communities, families, political parties, faith, race, and gender, we fail to challenge our politicians and ourselves to create real change. Now more than ever, we need to confront preconceived notions about the Democrats and Republicans, public policy, and American history.

Looking at the obstacles facing urban communities, such as crime, education, and social mobility, Caldwell digs beneath the statistics. By spotlighting the moments that enabled his rise to success, he proffers steps that can help more people overcome the odds—whether through policy reform or the heroic efforts of men and women who are already working to make a difference in their own communities. 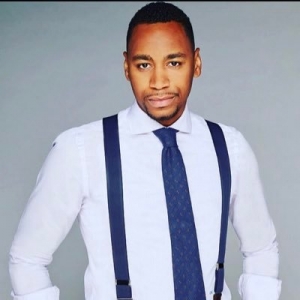 GIANNO CALDWELL is a Fox News political analyst and the founder of a bipartisan consulting firm based in Washington, D.C., that provides strategic advice in the areas of public affairs and government relations. For seventeen years, Caldwell has held roles at the federal, state, and local levels of government.