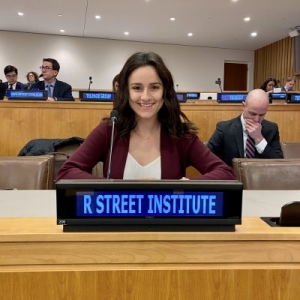 KRISTEN NYMAN, Government Affairs specialist at R Street.org; and  Fellow on the National Security and Cybersecurity team joins us to discuss the 2020 campaign and election security.

Nyman manages the federal affairs portfolios for R Street’s Technology and Innovation and National Security and Cybersecurity teams. She also serves as a fellow on the National Security and Cybersecurity team, focusing on the national security implications of various technologies and technological implementations, like election security infrastructure, the Internet of Things, and data privacy and security. Prior to joining R Street, Kristen served as a legislative assistant for Congressman Rod Blum (R-IA), managing issue areas including judiciary policy. Prior to that, she worked as a legislative assistant for Florida’s 118th House District, where she focused on state-level technology security issues. 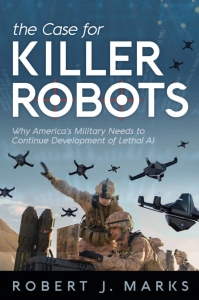 THE CASE FOR KILLER ROBOTS: WHY AMERICA’S MILITARY NEEDS TO CONTINUE DEVELOPMENT OF LETHAL AI

Doomsday headlines warn that the age of “killer robots” is upon us, and that new military technologies based on artificial intelligence (AI) will lead to the annihilation of the human race. What’s fact and what’s fiction? In The Case for Killer Robots: Why America’s Military Needs to Continue Development of Lethal AI, artificial intelligence expert Robert J. Marks investigates the potential military use of lethal AI and examines the practical and ethical challenges. Marks provocatively argues that the development of lethal AI is not only appropriate in today’s society–it is unavoidable if America wants to survive and thrive into the future. Dr. Marks directs the Walter Bradley Center for Natural and Artificial Intelligence at Discovery Institute, and he is a Distinguished Professor of Electrical and Computer Engineering at Baylor University. This short monograph is produced in conjunction with the Walter Bradley Center for Natural and Artificial Intelligence, which can be visited at centerforintelligence.org. 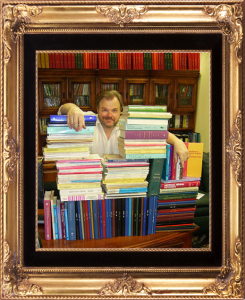 ROBERT J. MARKS II, Ph.D., is Distinguished Professor of Engineering in the Department of Engineering at Baylor University. He previously served 26 years at the University of Washington in Seattle. Marks’s  professional awards, include a NASA Tech Brief Award and a best paper award from the American Brachytherapy Society for prostate cancer research. He is Fellow of both IEEEand The Optical Society of America.

A MORE OR LESS PERFECT UNION, A PERSONAL EXPLORATION by Douglas H. Ginsburg explores the foundational document that governs those who govern us – the American Constitution.

A More or Less Perfect Union, A Personal Exploration by Douglas H. Ginsburg, explores the foundational document that governs those who govern us – the American Constitution. Hosted by Judge Douglas H. Ginsburg, a constitutional expert with 30 years of experience on the Federal Court of Appeals in Washington, DC, this thought-provoking, three-hour series looks at past, present, and future struggles for liberty through the lens of the U.S. Constitution. Constitutional experts of all stripes – liberal, conservative, and libertarian — consider the key issues of liberty: freedom of religion and the press, slavery and civil rights, the Second Amendment, separation of powers, and more. 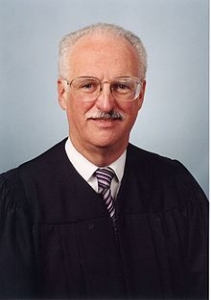 For 25 years JUDGE DOUGLAS H. GINSBURG hears more than 100 cases annually as one of the top appellate judges in the nation. Ginsburg was appointed to the United States Court of Appeals for the District of Columbia in 1986; he served as Chief Judge from 2001 to 2008. After receiving his B.S. from Cornell University in 1970, and his J.D. from the University of Chicago Law School in 1973, he clerked for Justice Thurgood Marshall on the United States Supreme Court. Thereafter, Judge Ginsburg was a professor at the Harvard Law School, Assistant United States Attorney General in charge of the Antitrust Division of the Department of Justice.  Concurrent with his service on the federal bench, Judge Ginsburg has taught at the University of Chicago Law School and the New York University School of Law. Judge Ginsburg is currently a Professor of Law at the Antonin Scalia Law School, George Mason University, and a visiting professor at the University College London, Faculty of Laws. Judge Ginsburg is the Chairman of the International Advisory Board of the Global Antitrust Institute at the Antonin Scalia Law School. Known among corporate attorneys as a “giant in antitrust law,” Ginsburg has heard appeals in several of the landmark antitrust cases of our times, including U.S. v. Microsoft. He also serves on the Advisory Boards of: Competition Policy International; the Harvard Journal of Law and Public Policy; the Journal of Competition Law and Economics; the Journal of Law, Economics and Policy; the Supreme Court Economic Review; the University of Chicago Law Review; The New York University Journal of Law and Liberty; and, at University College London, both the Center for Law, Economics and Society and the Jevons Institute for Competition Law and Economics.

Early 2020, a new PBS series on the Constitution, hosted by Judge Ginsburg, will air nationwide on public television. The three-part series, A More or Less Perfect Union, explores the most contentious issues of our day through the lens of the Constitution.