INDESTRUCTIBLE: THE UNFORGETTABLE STORY OF A MARINE HERO AT THE BATTLE OF IWO JIMA, by Jack Lucas  (Author), D. K. Drum (Author) 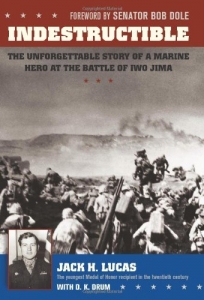 Here is an eloquent, plainspoken combat memoir of a young soldier who belongs in a class with World War II combat hero Audie Murphy. At the height of the Battle of Iwo Jima, Jack Lucas and three other Marines attacked a Japanese pillbox. When two enemy grenades landed in their midst, Private Lucas jumped on both grenades, just as they were exploding. His buddies were saved, but Lucas was torn apart. Miraculously, he survived-but just barely. For this brave action seventeen year- old Jack Lucas from North Carolina became the youngest soldier in the twentieth century, and the youngest Marine in history to receive the Congressional Medal of Honor. In Indestructible, we learn of the rocky road that led Jack Lucas to Iwo Jima-from his lying about his age to join the Marines to his going AWOL in order to join the action in the Pacific-and his arduous, frightening recovery following his heroic sacrifice. Today, wherever Jack Lucas speaks crowds gather to honor him and pay tribute to Marine heritage and pride as well as to pay their respects to one of America’s greatest generations.

JACKLYN “JACK” HAROLD LUCAS enlisted in the United States Marine Corps on August 6, 1942, at the age of fourteen. He was assigned to the 1st Battalion, 26th Marine Regiment, 5th Marine Division during the Battle of Iwo Jima. He received the Medal of Honor from President Harry S. Truman on October 5, 1945. After graduating from college, he enlisted in the United States Army in 1961 and served four years in the 82nd Airborne Division. He was married to Ruby Lucas and they lived in Hattiesburg, Mississippi. He passed away in 2008 at the age of 80.