ATMORE, ALA. (AP) —A Muslim inmate who complained in a legal challenge that Alabama wouldn’t let his Islamic spiritual adviser be present in the execution chamber has been put to death after the nation’s highest court cleared the way. Authorities say 42-year-old Dominique Ray was pronounced dead Thursday night of a lethal injection at the state prison in Atmore. 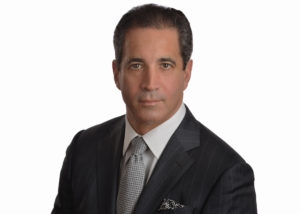 JOSEPH M. MARRONE, Esquire founded the Marrone Law Firm, LLC in 1993. The heart of the Marrone Law Firm, LLC is based in Center City Philadelphia, and has expanded his practice into New Jersey, with an additional office in Cherry Hill. Marrone graduated from law school in 1991, and then earned bar admissions in New Jersey (1991), Pennsylvania (1992), and New York (2004). He is also licensed to practice in the U.S. District Courts of the aforementioned states, the 3rd Circuit Court of Appeals, and the United States Supreme Court.  After graduating law school, Joseph worked as a political advisor to former Governor of Pennsylvania Edward Rendell for his mayoral campaign in Philadelphia. Shortly thereafter, he was appointed Assistant City Solicitor in the Rendell administration and spent countless hours representing the City of Philadelphia. Over the past two decades, Joseph Marrone has consistently represented clients throughout the Mid-Atlantic region in a variety of legal matters.

AFFECTING WHAT YOU HAVE ACCESS TO AND HOW MUCH YOU PAY: PRESCRIPTION DRUGS, NET NEUTRALITY

(from https://www.realclearmarkets.com) “UNDER-THE-RADAR ISSUES THAT COULD AFFECT THE 2019 ECONOMY”

GERARD SCIMECA is an attorney and vice president of CASE, Consumer Action for a Strong Economy, a free-market consumer advocacy organization. He joins us to talk about  what you have access to and how much you pay: Prescription drug prices, net neutrality, etc.

He has served stints as Political Director and Communications Director for a state party, headed Media Relations with a national non-profit organization, and written numerous opinion pieces and speeches for public figures as a free-lance writer.

INITIATIVES BEING PUT FORTH BY THE DEMOCRATS

LOWELL PONTE is a former Reader’s Digest Roving Editor. H talks about his recent articles written for wnd.com “The Left Unhinged: Billionaire Rules and “The New Reality: The New Politics of Advertisiing.” Ponte’s articles have appeared in the Wall Street Journal, the New York Times and other major publications. His latest book co-authored with Craig R. Smith, “Money, Morality & the Machine,” reveals how bad money drives good morals out of society and how you can protect your family from the future of “Star Trekonomics 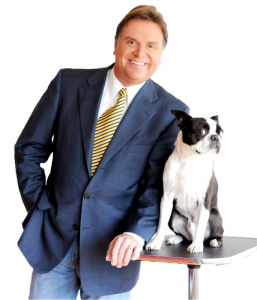 He puts on a family-friendly show full of laughter, magic, and music, featuring his talking dog Irving and a rotating cast of characters. As Irving the Talking Dog says, “You’ll be howling for more!” Would you like to meet a talking dog? A real dog that thinks “speak” means “speak your mind”? Then have Todd Oliver introduce you to his canine comedy partner, Irving the Talking Dog! Todd Oliver’s national t.v. appearances include The Today Show, The Late Late Show with Craig Ferguson, The Tonight Show with Jay Leno, The Howie Mandel Show, Walker Texas Ranger, CNN Entertainment News, and America’s Got Talent, where he was a Top 4 Finalist, as well as The Late Show with David Letterman, where he was selected one of the world’s top 5 ventriloquists. Todd has also performed around the world, in performing arts theaters and at clubs, conventions, corporate meetings, and schools.

NO BEAST SO FIERCE: THE TERRIFYING TRUE STORY OF THE CHAMPAWAT TIGER, THE DEADLIEST ANIMAL IN HISTORY, by Dane Huckelbridge  (Author) 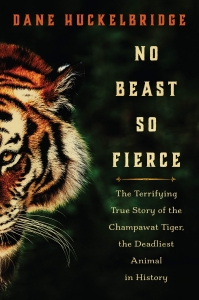 A gripping, multifaceted true account of the deadliest animal of all time and the hunter on its trail, equally comparable to Jaws as to Matthiessen’s The Snow Leopard.

Nepal, c. 1900: The single deadliest animal in recorded history began stalking humans, moving like a phantom through the lush foothills of the Himalayas. As the death toll reached an astonishing 436 lives, a young local hunter was dispatched to stop the now-legendary man-eater before it struck again. One part pulse-pounding thriller, one part soulful natural history of the endangered Royal Bengal tiger, acclaimed writer Dane Huckelbridge’s No Beast So Fierce is the gripping, true account of the Champawat Tiger, which terrified northern India and Nepal from 1900 to 1907, and Jim Corbett, the legendary hunter who pursued it. Huckelbridge’s masterful telling also reveals that the tiger, Corbett, and the forces that brought them together are far more complex and fascinating than a simple man-versus-beast tale. At the turn of the twentieth century as British rule of India tightened and bounties were placed on tiger’s heads, a tigress was shot in the mouth by a poacher. Injured but alive, it turned from its usual hunting habits to easier prey—humans. For the next seven years, this man-made killer terrified locals, growing bolder with every kill. Colonial authorities, desperate for help, finally called upon Jim Corbett, a then-unknown railroad employee of humble origins who had grown up hunting game through the hills of Kumaon. Like a detective on the trail of a serial killer, Corbett tracked the tiger’s movements in the dense, hilly woodlands—meanwhile the animal shadowed Corbett in return. Then, after a heartbreaking new kill of a young woman whom he was unable to protect, Corbett followed the gruesome blood trail deep into the forest where hunter and tiger would meet at last. Drawing upon on-the-ground research in the Indian Himalayan region where he retraced Corbett’s footsteps, Huckelbridge brings to life one of the great adventure stories of the twentieth century. And yet Huckelbridge brings a deeper, more complex story into focus, placing the episode into its full context for the first time: that of colonialism’s disturbing impact on the ancient balance between man and tiger; and that of Corbett’s own evolution from a celebrated hunter to a  principled conservationist who in time would earn fame for his devotion to saving the Bengal tiger and its habitat. Today the Corbett Tiger Reserve preserves 1,200 km of wilderness; within its borders is Jim Corbett National Park, India’s oldest and most prestigious national park and a vital haven for the very animals Corbett once hunted. An unforgettable tale, magnificently told, No Beast So Fierce is an epic of beauty, terror, survival, and redemption for the ages. 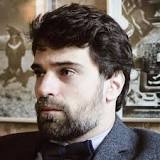 He is the author of Bourbon: A History of the American Spirit; The United States of Beer: The True Tale of How Beer Conquered America, From B.C. to Budweiser and Beyond; and a novel, Castle of Water, which has been optioned for film. 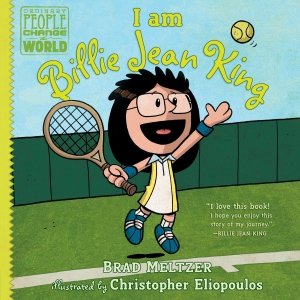 Billie Jean King is one of the greatest tennis players of all time. Read about this amazing athlete in the seventeenth picture book in the New York Times bestselling series of biographies about heroes.

This friendly, fun biography series focuses on the traits that made our heroes great – the traits that kids can aspire to in order to live heroically themselves. Each book tells the story of one of America’s icons in a lively, conversational way that works well for the youngest nonfiction readers and that always includes the hero’s childhood influences. At the back are an excellent timeline and photos. This volume features Billie Jean King, the world champion tennis player who fought successfully for women’s rights.

BRAD MELTZER is the New York Times bestselling author of Heroes for My Son, Heroes for My Daughter, and a number of suspense novels like The Escape Artist. He is also the host of the History Channel television shows Brad Meltzer’s Decoded and Brad Meltzer’s Lost History (in which he helped find the missing 9/11 flag). He lives in Florida with his wife and their three children.