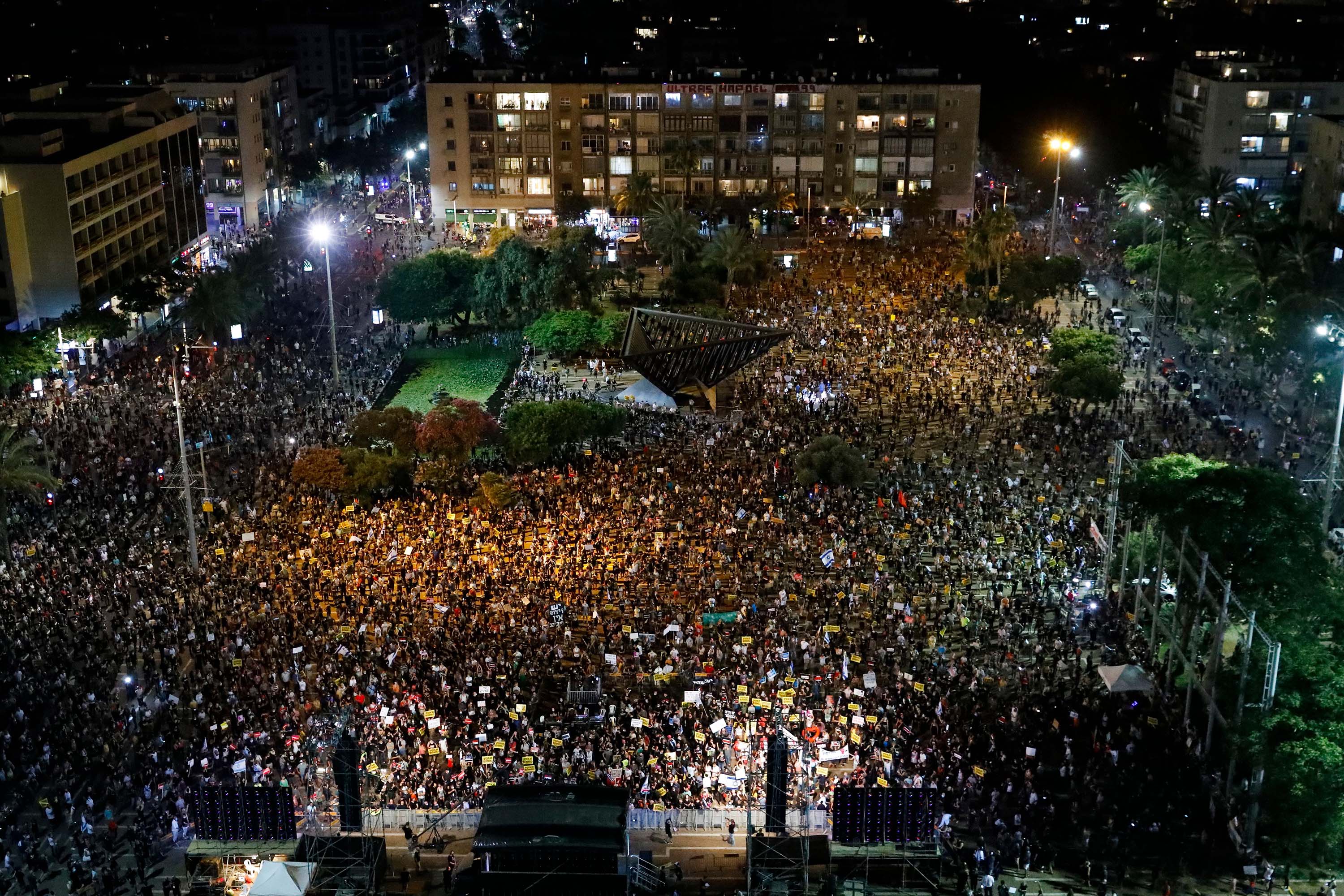 Major protests are breaking out against governments in several countries after coronavirus sparked fury over grievances including economic problems and alleged corruption or incompetence.

Demonstrators have taken to the streets to voice their anger at perceived failures by leaders to rise to the unprecedented challenges heightened by the pandemic.

For many, it underlines the sense that Prime Minister Benjamin Netanyahu has badly slipped up after appearing to have the virus firmly under control just two months ago.

Thousands of protesters rallied in Tel Aviv on Saturday, with thousands more protesting outside Netanyahu’s official residence in Jerusalem on Tuesday.

Referring to Netanyahu’s ongoing trial on bribery and breach of trust charges — charges the Prime Minister denies — protesters held signs that read, “We’re saving democracy, we’re fighting corruption” and “No to dictatorship under cover of corona!”

Some blocked a tram line in Jerusalem’s main shopping district and damaged property, according to police. Video showed protesters attempting to break through the metal barriers on the street outside the Prime Minister’s residence. Police say they made 50 arrests throughout the evening.

Tuesday’s protest was led by the anti-corruption Black Flag movement, but the demonstration also focused on Israel’s deteriorating economic situation brought on by the pandemic. The country’s unemployment rate hit 21% this week and recent surveys have shown public trust in the government’s handling of the health crisis plummeting.

A Black Flag spokesperson told CNN that Netanyahu should resign and make way for someone who could solve the country’s problems rather than focus on defending himself in court. Roee Neuman also disputed claims the protest had a violent edge to it, describing it instead as “stormy.”

“We are talking about the frustration of people,” he said.

Protests over curfew in Serbia

Protests erupted into violence in Serbia’s capital of Belgrade last week during demonstrations sparked by the government’s plan to impose a curfew to try to curb a dramatic surge in coronavirus cases.

Authorities dropped that plan after two nights of rioting, instead reimposing a ban on indoor or outdoor gatherings of more than 10 people, and closing all hospitality and retail venues between 9 p.m. and 6 a.m.

But protests continued in Belgrade and other cities, with the rallies evolving into wider dissent over the rule of Serbia’s President Aleksandar Vucic.

Protesters allege he lifted the lockdown too soon so he could hold parliamentary elections in June — the first in Europe during the pandemic — and allowing large gatherings, bars and nightclubs to work at full capacity. They say he then tried to reimpose it after the vote as the number of infections escalated.

The ruling party won by a landslide and most of the opposition boycotted the election.

Vucic has repeatedly denied those accusations, on Friday blaming his political opponents for orchestrating protests. He previously said “extremist” and “foreign agencies” caused the unrest.

Serbia suffered its highest daily death toll on Friday. Prime Minister Ana Brnabic called it “the worst day” since the beginning of the pandemic, with 386 new infections and 18 deaths. On May 6, when Serbia revoked the state of emergency and lifted most restrictions, there were three deaths and 48 new cases, according to the Ministry of Health.

She said protests during the pandemic were “irresponsible” and did not rule out imposing a curfew if the situation deteriorates further.

Serbia’s Minister of Health Zlatibor Loncar said hospitals were “absolutely overloaded,” with patients from Belgrade being diverted to hospitals in cities up to 50 miles away.

During Thursday’s largely peaceful sit-in by the parliament, some protesters held signs saying “sit down.” Several told CNN affiliate N1 this was an attempt to distance themselves from what they called “provocateurs who caused the riots” during the rallies on Tuesday and Wednesday.

Amnesty International on Thursday warned against the “disproportionate use of force against entire demonstrations” after video emerged of police beating three men who were sitting on a bench.

Protests linked to the virus have emerged in other countries, too.

In Lebanon, hunger protests started in May just as the country was loosening its lockdown, and beginning to contend with poor living conditions exacerbated by the near shutdown of the economy. Nightly confrontations between demonstrators and the Lebanese army rocked Tripoli, turning it into the epicenter of the country’s renewed uprising against its political elite.

But as the economic crisis has worsened, the flurry of small demonstrations that continue around the country are receiving less attention, and a string of suicides dominates conversation.

In Bulgaria, anti-government protests have flared up again as coronavirus cases continue to rise. Dimitar Bechev, a a research fellow at the Center for Slavic, Eurasian, and East European Studies at the University of North Carolina, told CNN: “Covid probably is at play very marginally in the sense that people were stuck at home and now they can go out.” But he said the real reasons were around ongoing allegations of corruption among the political leaders.

A report from the Institute for Economics and Peace entitled Covid-19 and Peace reads: “The pandemic will undo many years of socio-economic development for several countries, exacerbating humanitarian crises and potentially aggravating unrest and conflict.”

The IEP said that most of the indicators of its Global Peace Index (GPI) and Positive Peace Index (PPI) — which measures the attitudes, institutions and structures that create and sustain peaceful societies — were “likely to be negatively impacted by the COVID-19 pandemic.”

“The prospect of social and political unrest appears to be spreading along with the virus,” wrote three experts for non-profit public policy organization Brookings Institution in June. “Already, protests are cropping up in Lebanon, Iraq, India, Peru, and the United States, in many cases building on prior unrest.”