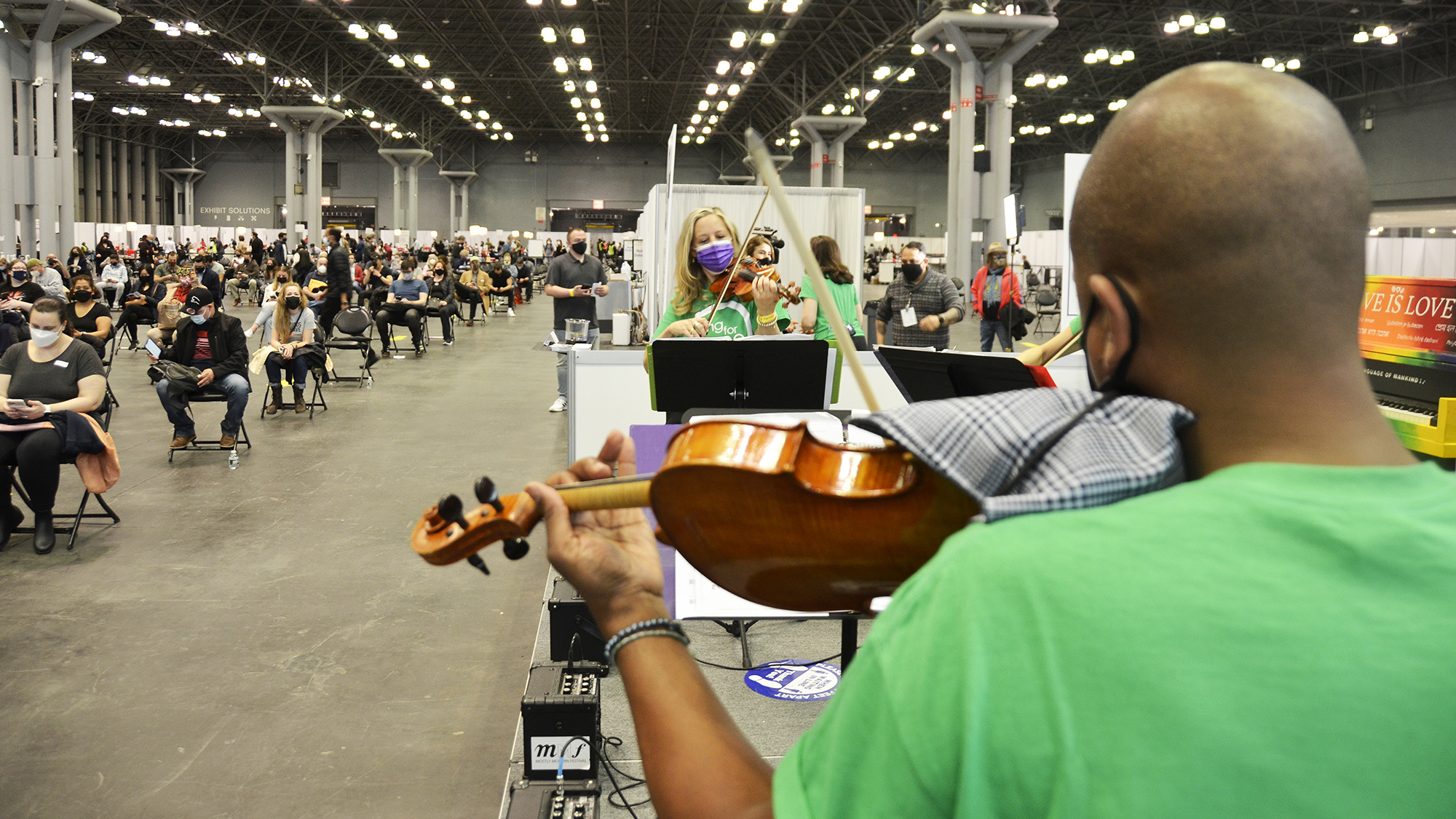 In New York City you can hear the beginnings of a post-pandemic world as much as you can see them.

At Manhattan’s Javits Center, one of the busiest convention centers in the country in pre-pandemic times, roughly 9,000 New Yorkers shuffle through every day to receive their Covid-19 vaccines.

Thanks to Sing for Hope, the non-profit arts advocacy group known for their colorful public pianos spread across the city, you can also be serenaded while receiving your vaccine.

Through its daily performances inside the Javits Center, the organization helps tackle the dual problem of “rampant artist unemployment” and anxiety surrounding getting a Covid-19 vaccine, Monica Yunus, co-founder of Sing for Hope, told CNN.

The group pays unemployed artists directly through donations, said Camille Zamora, Sing for Hope’s other co-founder. Zamora said most artists are instrumentalists who would normally play for ensembles, orchestras or in the pit for Broadway plays.

As people wait the required 15 minutes after a vaccination to monitor any rare, adverse response, anxiety can run high, Zamora said. That’s where Sing for Hope comes in, to “use music’s power as a healing art in the truest sense on a vast scale.”

The performances run the gamut: from jazz to classical to Broadway hits and gospel.

Damage to the arts industry remains

It may have seemed like a pipe dream just months ago, but swaths of New Yorkers are now getting jabbed with vaccines that health experts say will eventually help the country return to post-Covid-19 normal.

It’s no secret that the coronavirus has exposed healthcare inequity, food insecurity and the growing divide between the white collar, work-from-home “Zoom class” and everyone else.

The arts have also been devastated.

Financial losses nationwide to nonprofit arts and culture organizations have reached $16 billion due to shuttered concert halls, plays and other live performances, according to nonprofit Americans for the Arts.

By the summer of 2020, 63% of artists or creatives experienced unemployment, Americans for the Arts spokesperson Inga Vitols told CNN. The national unemployment rate, meanwhile, hit a peak of 14.8% in April.

By the end of July last year, analysts at Brookings estimated losses of more than $150 billion in sales for creative industries nationwide due to the pandemic.

“Let’s talk about the fact that the arts are an economic driver. They’re not just a nice-to-have, they’re a need-to-have,” Zamora said. “We need to be talking about this in the highest channels of power. Because try to rebuild the cities without the arts — it won’t work.”

Part of New York Gov. Andrew Cuomo’s plan to “build back better” is indeed revitalizing the arts through “NY PopsUp” performances, free to all New Yorkers. Sing for Hope is supported in part by the New York State Council on the Arts, along with the New York City Department of Cultural Affairs.

But for Zamora and Yunus, a post-Covid-19 “new normal” should be a step forward in fixing underlying issues in the arts community rather than reverting to the status quo.

“We as citizens need to own this. If nothing else, I think this moment has allowed us to take a look around and say, ‘this is what’s important to me,'” Yunus said. “[Artists] were not able to collect unemployment until after a very long process that was very confusing and very difficult.”

“I think we need to look more progressively ahead and not necessarily [do] funding through the normal channels,” said Philip Payton, a violist who has been performing at the Javits Center several times a week.

For Payton, the performances have provided a much needed break.

Though performers may ordinarily recoil at the thought of playing another universal crowd-pleaser like “Pachelbel’s Canon,” Payton said the audience response is what makes the performances worth it.

“We get these incredible reactions — it’s really a privilege,” he said.